A recent study on higher education’s capacity to be antiracist asserts that “higher education systems are a complex web of practices, policies and procedures steeped in White normativity.” My own work, including a recent book, The New White Nationalism in Politics and Higher Education, identifies “whiteness as a flexible system of control that changes over time, always ensuring that institutions, policies and practices benefit, at minimum, white heterosexual, patriarchal elites.”

Indeed, whiteness is so baked into our norms that it is easy to overlook the ways in which it exerts itself, even as we implement initiatives aimed at antiracism. To manifest a liberative educational system, though, we must grapple with the uncomfortable truth that in our work on antiracism, we have generally focused our lens on only the effects of systemic racism and often overlooked the cause.

One of the effects of whiteness is marginalization. While we must eliminate marginalization, we often focus our efforts on doing so without working to disrupt the normative and powerful center of whiteness upon which systemic oppressions are built. We must, therefore, look at both whiteness as a cause and marginalization as an effect in our antiracist work.

The common practice of antibias training in hiring, promotion/tenure and evaluation provides an example of why we need to adopt new lenses toward whiteness in our antiracism work in higher education.

Antibias training efforts often function to ensure that those who have the authority to hire, evaluate or make decisions check any biases they have against marginalized groups of people they are evaluating by avoiding:

Underpinning that approach is an assumption that by addressing biases against minoritized candidates, any skewed judgements of candidate pools, promotion/tenure packets or evaluations will be eradicated. Yet, more likely, there is a simultaneity of bias stemming from whiteness in the stance evaluating others takes. That simultaneity consists of marginalization of nonwhites, on the one hand, and the potential privileging of already privileged identities, on the other. Current antibias training generally works to ensure marginalized candidates are not devalued as a result of biases stemming from whiteness. But antibias training should also work to avoid majority candidates from being overvalued at the same time.

Indeed, one reason for the slow pace of progress regarding the diversification of the professoriate may be that inclusion and diversity initiatives do not require introspection of how whiteness protects its own power in implicit and powerful ways. For the very notion of inclusion is itself laden with power. Inclusion accepts that there is a group that already decides who and how to bring others into the space they inhabit and have already set the norms for.

More explicitly, when there is a focus on eradicating implicit biases that marginalize, there is another implicit belief yet unchallenged: that those included (often whites) have always been objectively evaluated. The assumption, therefore, is that by focusing on bias against minorities, all evaluations of people will be objective and fair. But there is likely a phenomena whereby certain scores of applications, promotion/tenure candidates or faculty/staff for annual reviews are inflated because of whiteness. As a result, antibias training is but one example of our current paradigm where we work toward antiracism but at times neglect to confront whiteness holistically.

By way of looking at numbers, the National Center for Education Statistics notes that 3 percent of full-time professors are Black men and 4 percent are Black women. In contrast, nearly 79 percent of full-time professors are white men and women—this against a United States population of 12 percent African American people and 60 percent white people. To be sure, the underrepresentation of Black professors is a product of systemic racism outside as well as inside the academy stemming from whiteness. But we must acknowledge that the overrepresentation of whites is a result of whiteness where candidates may be being evaluated in an inflationary capacity in the application or promotion/tenure process.

Confronting whiteness is crucial for student success initiatives, as well. In the context of academic integrity and grading, Shaun R. Harper’s and Charles H. F. Davis’s “Eight Actions to Reduce Racism in College Classrooms” and Davis’ “Hence, This Is Racist” do an excellent job of underscoring why and how professors must become racially literate of their own biases to avoid penalizing students unfairly. I would add to their analysis that just as minoritized students are often policed unfairly, students in the majority are often ushered successfully through their education without so much as a side-eye.

For example, Antar Tichavakunda identifies the different experiences that students in the majority have when it comes to testing integrity and the potential for cheating. According to Tichavakunda, the historic privileges of being white run along a spectrum of access. Tichavakunda writes that many whites have access to “test banks” housed in traditionally white fraternities and also escape being unfairly surveilled by test-proctoring software or the white gaze.

As evidence, Tichavakunda writes about an incident where an African American woman scholar moves from her seat during a test because a non-Black student is peeking at her test answer: “She moved because she was worried the professor would accuse her of cheating off the other student’s test.” To be sure, the surveillance of minoritized students must be acknowledged and eradicated. In this case, however, the student who was actually cheating seems to have gotten away with the act. (One has to imagine that the student knew he would not be so much as suspected.)

Rather, they imply that two kinds of biases are at work, but only one focused on: that of the bias against marginalized students. But opportunity gaps often reveal not only a marginalization of minoritized students but also a presupposition of white innocence or excellence.

Is it therefore possible that majority students’ grades have been inflationary and are part of the reason for opportunity gaps in student success data collection? If so, what further nuance can be delivered to the excellent thinking behind opportunity gap data collection spearheaded by the Center for Urban Education? My argument here is not to suggest greater surveillance of any student, faculty or staff member. Rather it, is to advocate for having a more disruptive perspective on higher education’s whiteness than we currently practice.

I cite these two examples of antibias training and academic integrity to offer a lens regarding power and how it exerts itself racially on our campuses. I do so to demonstrate that application of theory requires a nuanced understanding and approach. As we as an academy continue work on using education for liberative potential, there are some beginning points for us to apply disruption of whiteness in our practices.

In the context in which we live, higher education is one of the sectors that the public is questioning. Yet it is also one of the few institutions that has the potential to empower citizens intellectually, socially, economically and culturally. Committing to antiracism philosophically is a significant step as an institution. However, it is in the application of work, and through the lenses we use to do that work, that we will either succeed or fail in living up to the philosophies and values we embrace.

Hearing the Voices of Parents, Families, and Caregivers

Mon Sep 5 , 2022
By: Dawn Ellis, PhD, Liaison to Parents and Families, National Engagement Team, Office of Communication and Outreach In January 2022, Secretary of Education Miguel Cardona shared his vision for education in America, which addressed the need for more meaningful and authentic parent and family engagement. Sara Morrison, a mother of […] 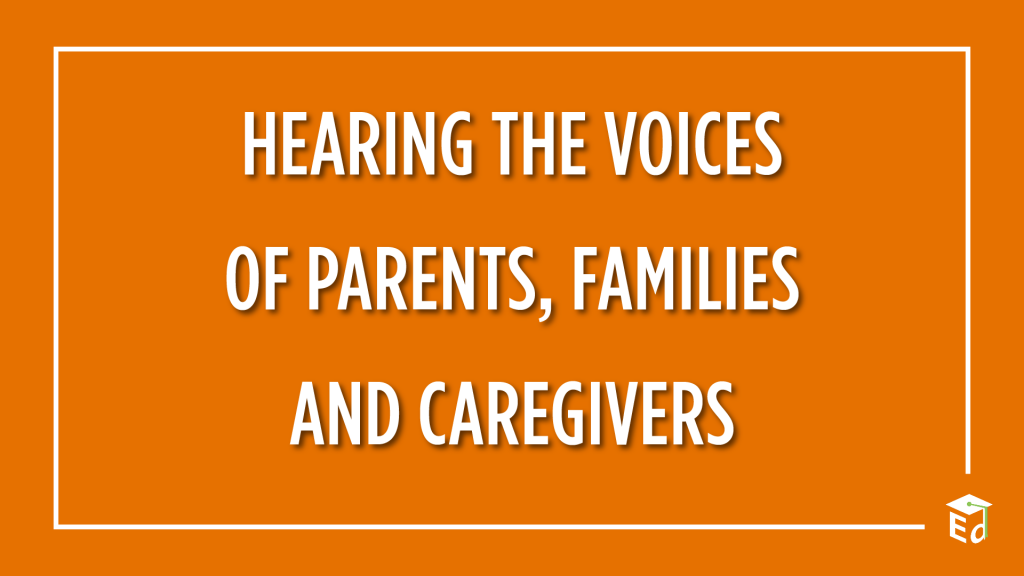