Chromebooks and the ChromeOS are huge in K-12. In higher ed, not so much.

If you had asked me a few years ago, I would have said that I was fairly convinced that the Chromebook was poised to be a major player in higher ed tech.

The reasons that I thought that students (first) and then staff (second) and faculty (third) would start to bring (or be handed) Chromebooks on campus mirrored why K-12 was going ChromeOS. These reasons include:

Lower Total Cost of Ownership: ChromeOS laptops are cheaper than Apple and Windows machines to buy and are much less costly to maintain. An OS built around web apps means there is less to install and fix. Files living in the cloud mean fewer headaches for recovery and backup.

The Move from Office to Gmail and Google Docs: A shift to Chromebooks seemed inevitable as we all shifted to Gmail and Google Docs. Indeed, a laptop that was built specifically to run these Google web apps would make for a productive and enjoyable experience. Applications seemed to have been shifting from the machine (client) to the cloud, making it less necessary to deal with the overhead of a full OS.

Security: Owning a Windows machine meant constantly fighting viruses and other potential security challenges. Macs are not immune from attack. The ChromeOS seemed to be more secure and easier to protect.

In Googling around, I could not nail down the Chromebook market share in higher ed. (Maybe you can help?). In K-12, Chromebooks seem to account for 40 to 60 percent of all school/district purchases.

Observationally and anecdotally, I don’t see or hear all that much about Chromebooks in higher ed. Why might that be? I have five guesses.

Much of what we do on our computers has moved to the web. But not everything. There is still software that either runs better or will only run as native client apps. Anyone who does any video editing, statistical analysis, or data visualization will want to work with software designed for macOS or Windows. The usability of web applications remains limited as compared to applications designed to run on Apple or Windows laptops. Most students, staff, and faculty want the choice of running either web or client apps. This is particularly true of MS Office, where the web apps for Word/Excel/Powerpoint have never caught up with the full client software versions.

If cost was the main reason to go for a Chromebook, the proliferation of inexpensive Windows laptops weakened the case for ChromeOS machines. Low-end Windows laptops are priced at less than $500. On the high-end, Chromebooks can cost more than mid-tier Apple or Windows machines, with the HP Elite Chromebook retailing for more than $1,600.

Nowadays, how much can we do in higher ed that does not involve our computers? The pandemic has pushed most meetings from face-to-face to Zoom. We live on email, collaborate on Google Docs, create presentations, and write papers on Office apps. The last laptop I purchased was a MacBook Air for about $1,100. With how much of my academic work that depends on my laptop (really, all of it), paying for a quality machine seems like a good value. Even campus-based and face-to-face academia is now highly digitally mediated. With all of us dependent on our laptops to work, it seems penny-wise and pound-foolish to get laptops that can’t do everything we need.

Apple enjoys a better than 50 percent market share with the iPhone in the US mobile market.  If anything, I would guess Apple’s higher ed mobile market share is even higher. One of the reasons why I think we see so many MacBooks in higher ed is all those iPhones. (And iPads). The perception may be that staying within a single ecosystem is easier.

Guess #5 – Google Has Not Made a Big Higher Ed Chromebook Effort:

How much has Google focussed on winning the higher ed laptop market? It seems as if Google has directed significantly more effort into the K-12 market than into higher ed. This may make sense, as K-12 adoption is at the district level. Universities seem to be moving away from requiring that all students purchase the same laptop. Google Classroom is all over K-12 but is not an LMS substitute and is therefore absent from higher education. Should Google make a push for broader and deeper Chromebook adoption at colleges and universities?

Are you a higher ed person relying solely on a Chromebook to complete your work?

Any Chromebook using college students who may want to share the reasons behind your ChromeOS choice?

Mon Sep 12 , 2022
Very often when I ran courses participants would tell me that they only have a patch of tarmac for the children to play on. Whilst in the long term, all sorts of changes can happen, in the short term, the space needs to be used cleverly. Permission is usually needed […] 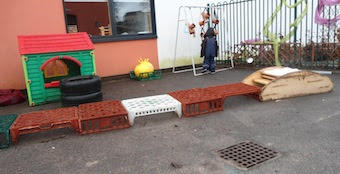